skip to main | skip to sidebar

I don't think its a secret to anyone that we love our privacy. We don't answer our door much, unless we know who it is. We realized that if someone was standing at the right spot or was really tall, they could see us coming down the stairs and then ignoring their knocks (Haha). For awhile I looked for a solution. Whenever I went on walks around the townhouses in my neighborhood I would look at what other people had, well I thought that newspaper or aluminum foil was a little too ghetto for my taste. 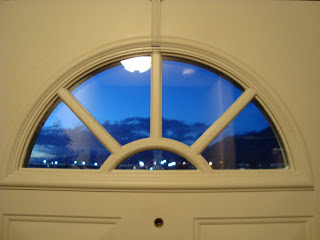 So I went to Home Depot to find a better alternative. That's when I found it, and I don't even remember the name of it, its just a roll of sticky on stuff for glass. (Aren't I so descriptive?) It's over by the window stuff, like blinds and stuff if you're interested.

It wasn't the easiest thing to do cuz of all the small spaces. I actually didn't mean to line it up but it looks like I did. Now the light can still come through but people can't see in. Perfecttt. 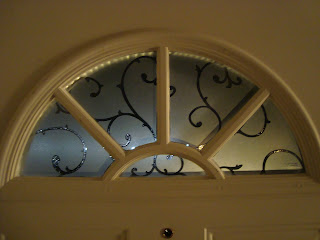 There is a lot of designs to choose from, I'm obsessed with anything swirly so that's why I chose this one.
Created by Michelle at 8:32 AM